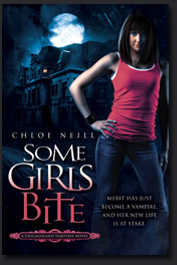 Have you heard of Some Girls Bite by Chloe Neill?  It’s this great novel that is a superb addition to the Urban Fantasy genre and I could not put it down.

First in a brand new series about a Chicago graduate student’s introduction into a society of vampires.

Sure, the life of a graduate student wasn’t exactly glamorous, but it was Merit’s. She was doing fine until a rogue vampire attacked her. But he only got a sip before he was scared away by another bloodsucker—and this one decided the best way to save her life was to make her the walking undead.

Turns out her savior was the master vampire of Cadogan House. Now she’s traded sweating over her thesis for learning to fit in at a Hyde Park mansion full of vamps loyal to Ethan “Lord o’ the Manor” Sullivan. Of course, as a tall, green-eyed, four-hundred- year-old vampire, he has centuries’ worth of charm, but unfortunately he expects her gratitude— and servitude. But an inconvenient sunlight allergy and Ethan’s attitude are the least of her concerns. Someone’s still out to get her. Her initiation into Chicago’s nightlife may be the first skirmish in a war—and there will be blood.

If you haven’t checked out this book yet, you really need to.  I am digging the chemistry between Merit, Ethan and Morgan, especially the inevitable triangle of emotions that’s going to occur in future books.  I also like the way Neill introduces and has Merit adjust to vampire culture/society. She’s not instantly gracious that Ethan saved her life and she makes sure he knows it.  For being a new vampire, the fact that she stands up to Ethan from the beginning made this such a fantastic read.  And to say that Ethan isn’t a great mystery would be lying.  Seriously, he comes off as someone who possibly has feelings for Merit, but he doesn’t let that get in the way of his House responsibilities.  Especially when he encourages the relationship with Morgan from another house.  I have a feeling things are going to get interesting between these three.

As for the overall story, this was just a captivating read and I had such a hard time putting it down.  I actually managed to read it all in one day, even with my son being home and a terror (and here I thought he had hit the terrible twos awhile ago – I was soooo wrong).  The trials Merit goes through while she adjusts to becoming a vampire actually ring true for me.  She’s been thrust into this new society/culture and she does a lot of stumbling.  The interactions between her and the other vampires are curiously intriguing and I can’t wait to see how a few of these relationships turn out.

Overall, I seriously can’t wait until Friday Night Bites comes out on October 6th.  Seriously.  Some Girls Bite was a great story and I know my review is a little short, but I actually read it last week and I couldn’t think of anything to say other than GO BUY IT NOW!  It’s a great urban fantasy that reads a little like Charlaine Harris’s Southern Vampire series – in the idea that it has its serious moments, but it does it without going all dark and twisty.  If you haven’t done so already, make sure you check out the guest post Chloe Neill did where she talked about heroes and heroines last week.